I’ve had people ask me what happened, why I stopped cosplaying often, why I stopped attending cons outside of DragonCon. In some ways, it was just growing up, out of it, vacation days and funds put toward international travel, our priorities shift. If you’ve been at this hobby for 20 years and still enjoy it as much as you did, that’s fantastic. I hope it never loses its magic, but the sad truth is cosplay did lose it’s magic for me. We’ll call this addition to my Adventures in Costuming, ‘The End of Innocence’.

I’ve never told this story outside of a few close friends and even then I don’t know if I’ve ever fully gone into details. It’s been nearly a decade, so might as fucking well.

Let’s go back to the late summer of 2009. It was my first summer away from my hometown, in many ways I was still displaced, I had to drive 45 minutes north into Maryland to use my friend’s sewing room if I had any cosplay project I wanted to work on. Otakon had come and gone, an ambitious CLAMP Code Geass costume barely worn after I came down with a miserable cold the morning of the con. I was preparing for DragonCon, which has always been my con for ‘fun’ costumes. I was making another version of Vesper Lynd, we had joke Twilight drinking costumes where we doused ourselves in body glitter. Around this time my friend, Yaya Han, approached me about the newly announced Yume cosplay contest to be held at New York Anime Festival. The grand prize was an all expense paid trip to Tokyo for 5 days, $1000 in prize money.

I think I was honoured more than anything that a friend who I considered at the time to be infinitely better at cosplay than I ever would be wanted to do this together. I also accepted there would be some fallout, I’d have to be prepared for some minimal drama in the wake of competing regardless of whether we even placed or not. I remember my answer was not immediate, I took a day or two to decide if I was truly prepared to enter into a masquerade–despite having cosplayed since early 2004 at this point, I had never before competed outside of one hall cosplay contest.

We settled on Carmilla and Charlotte Elbourne from my favourite animated film, Vampire Hunter D: Bloodlust, shared ideas via email as we were creating these costumes independently of one another. Yaya sent me matching gold fabric, cast my jewelry, we listened to various music tracks, plotted our skit that we would not have a chance to practice until the night before the competition. 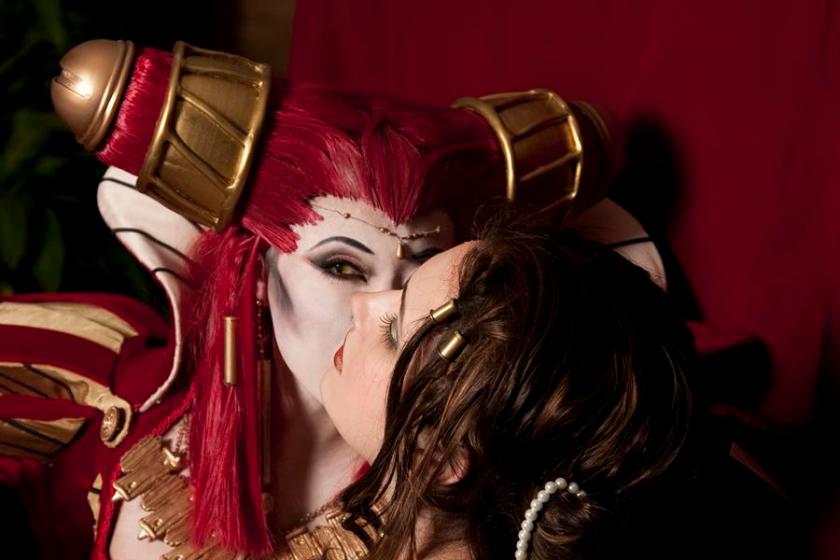 I spent countless nights at my friend’s house 45 minutes north, weeknights, weekends, often out until 2 AM sewing, working, sometimes crying. I learned a lot making Charlotte because I couldn’t cut corners, I couldn’t make it look good simply by being a pretty girl in a fancy dress. It had to be perfect. I fixated on every seam, every stitch. Toward the end, I hoped for a catastrophe. I no longer wanted to go, no longer wanted to compete, it was as if I knew subconsciously that it would begin the rot that would eventually kill my love for cosplay.

I finished my costume two nights before we left. It wasn’t perfect, but it was the best I could accomplish given my circumstances. Alex and I caught a bus up to New York City. I’d never been before, but this wasn’t the ideal first time visit to this city. We got in sometime around 8 PM, checked into the New Yorker Hotel, grabbed a quick dinner from the diner down the street. I barely ate anything, too nervous, too anxious.

That night Yaya and I put together our skit in the empty breakfast dining area of her hotel, which we’d gotten permission to use. I was in flats so I didn’t tower over Yaya, which made me inelegant. We practiced for an hour or so, recording our performance, rewatching, redoing.

The next morning we hurried over to judging. I felt unprepared, disconnected as I helped Yaya into Carmilla. I’m very bad at up-selling myself, and barely remember how judging went, only that we were surrounded by stunningly beautiful costumes from our competitors. The day wore on, we went into the masquerade hall and were given the opportunity to practice, to orient ourselves with the stage. At some point Alex and Brian brought us sodas and water while we waited for the masquerade to begin. 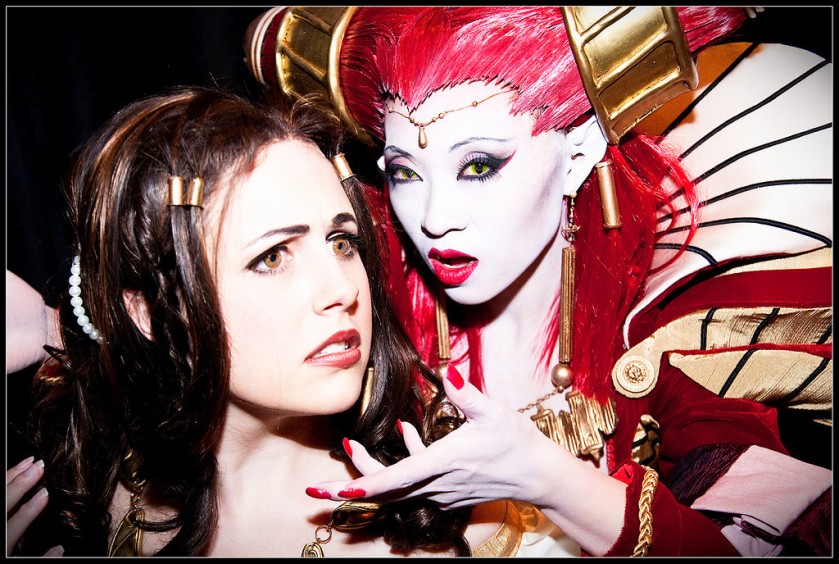 We cheered on those who performed before us. There were so many lovely costumes, choreography. I don’t remember if we were the last to go on stage, but if not, we were among the last competitors. Never an easy thing to do after you’ve seen everyone else. While we waited backstage, I remember posing for a few photos, and trying not to have a complete panic attack. Despite years of being a dancer, the older I got, the more anxious I became over performing in front of a crowd.

I was only minimally aware of our performance–later people would say I ‘looked like a bitch’ because I was concentrating. I remember laughing with relief when it ended, helping gather up Yaya’s massive train, and waving to the audience. In that moment, I had no idea we would win. As they called out the winners, Yaya and I held hands pretty much resigned to the fact that the competition was too amazing and we’d not even placed.

The winner of the Yume Grand Prize.

Our names were called. It became a flurry of congratulations, smiles, waving, thanking the judges. I never expected us to win.

Barely 5 minutes after we gave our final little interview in the masquerade hall, I called my dad to tell him of our win. Cosplay had always been a bit of something my parents didn’t understand, and I guess in that moment I thought maybe having won something would make it more meaningful. While talking to him, I heard another competitor ranting to anyone who would listen how he was robbed of the grand prize, he was in a giant Transformers costume, how dare we win simply because we were hot girls. It sort of took the joy out of the moment. Talk about shitty sportsmanship.

I went back to my hotel, changed. Alex and I once again went down to the diner, where I ate for the first time all day. The drama had already begun. I had barely had time to get back from the convention centre and changed before friends were texting me to tell me about what was being said online. Not about Yaya, but me. How I was undeserving of the award, how I’d only won because Yaya carried the team. People who were wrongly assumed to friends to complete strangers had some sort of negative opinion they needed to share. My costume wasn’t impressive enough, I’d not earned my right to win by having never competed before, my weight, my appearance, my ‘bitchface’, all my costumes ‘looked the same’–which, I do have a style, but really you fucks? I hadn’t even been able to celebrate and I was already being told by the internet to go kill myself because I’d won a fucking cosplay competition.

I had a person who I’d wrongly assumed was a friend tell people she made my costume, that I couldn’t sew. People believed her, not because she had proof but because they wanted something to validate their hate. While I had anticipated some drama, I never expected what followed. For the months that followed I had no idea who to trust. I avoided most people.

Every photo I posted, someone left at least one negative or backhanded comment. Some of these people still lurk around my social media accounts, liking my posts as if they didn’t do this shit nearly a decade before–cosplay.com has the fucking receipts. The only ally I truly had in the wake of this was Yaya who vehemently defended my costume and shut down anyone trying to negatively target me.

But you know, that truly killed something in cosplay for me. I’d barely even had time to process that something that I’d worked on as hard as I could had won this award, that I’d not failed my friend who’d relied on me to see this through along side her.

No, in retrospect, it wasn’t my best work, not by far. But it was, at that time. This was 2009, we weren’t doing flashy skits and massive builds, we were two women in gowns working with no props, no backdrop, competing against amazingly talented people. We edited our own music, choreographed our own skit, had sewn our costumes to match while 4 states away from one another.

I remember returning home not wanting to talk about our win, I wanted it behind me. I no longer cared. I came down with a terrible cold days later from the stress, bedridden for days with only the shitty comments, the anonymous messages, the bullshit and hate. People I’d never done anything to unfriended me on social media.

I wore the costume only once after our win for photos at AUSA, and sold it the following year. By the time we got to Japan the following March, my desire to cosplay has all but diminished. We took our prize money and extended our trip for 5 more days. I didn’t cosplay in Japan; I didn’t care that I didn’t cosplay in Japan. I spent my time exploring Tokyo, enjoying the company of my friends. And yes, most of my best work came after I made Charlotte, but I could never wear a costume for more than a few hours, I never felt comfortable cosplaying, I didn’t feel welcome at cons knowing what people had said. Jealousy is a fucking monster, and it ruined cosplay for me. I will never not love sewing, creating, costuming, but when people are like cosplay is for everyone and cosplay is fun and positive and welcoming, I’m like, sometimes, but it’s also a rancid rotting thing. I can’t say if it’s gotten better, worse, or simply stayed the same. I spent years trying to recapture that magic cosplay and cons once held, but sometimes the damage is too great.

I want to mention that winning that competition did nothing to advance me as a cosplayer. I was invited to judge one cosplay contest, a regional Yume qualifier at AUSA that same year. It would be the 2nd and final year that NYAF would hold the Yume competition before NYCC annexed NYAF. I didn’t get lavished with attention, I didn’t get invited to cons as a guest. Yes, at the time cons weren’t giving out large prizes like paid trips to Japan unless you were working for it like WCS, but it did nothing for me in the long term except make me realize how awful some people in this hobby can be. Maybe we weren’t as outspoken against internet bullying, maybe people weren’t as fucking ‘woke’.

But there you have it, why I don’t really care to cosplay that much any longer. Why I’m not excitedly awaiting Katsucon each year, or attending 7+ cons every season. And to those who know who they are, those people who pretended to be my friend and went immediately to shit on my win, I hope you guys never do it to another person. I hope you’ve learned, realized how shitty that behaviour is. Maybe you haven’t. Maybe you are morally bankrupt people, but I’d hope nearly a decade later you’d know better or have better things to do with your lives.