As the air begins to get a little cooler, the days shorter, and the leaves turn to hues of gold, orange, and red, we welcome in a season that drives many costumers batshit.

As the air begins to get a little cooler, the days shorter, and the leaves turn to hues of gold, orange, and red, we welcome in a season that drives many costumers batshit. Despite my self professed Gothic tendencies, Halloween is a holiday that does little for me. There’s a certain nostalgia to the Halloweens of past spent with my friend, Crystal, wearing whatever pieced together costumes we’d constructed for the evening, watching Bram Stoker’s Dracula while drinking red Kool-Aid, the Buffy: The Vampire Slayer Halloween Special, the fact that I could wear vampire fangs to class and no one would judge me for it. 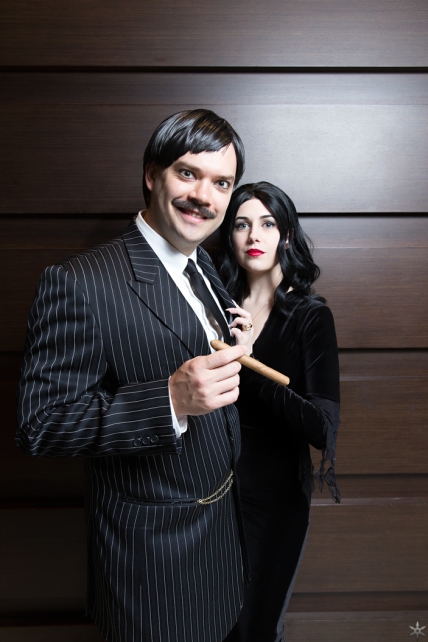 These days, the Halloween kitsch is something I avoid, the stench of cheap plastic and polyester costumes coupled with rubber corpses and ghouls that permeates Halloween stores is nauseating. Using the holiday as an excuse in which to dress up no longer holds much appeal in the wake of conventions. It also marks that time of year where people who I’ve never talked to who found me through random internet searches or my now closed Etsy store approach me in hastily written messages, inquiring about sewing them and their daughter and their daughter’s best friend’s Halloween costumes.

This is a topic that is sometimes difficult to address. After all, shouldn’t we as costumers be flattered, honoured that someone would approach us to sew their Halloween costume? In a way, yes. I truly do appreciate every compliment and kind word anyone sends my way about my costuming work, however compliments are not monetary funds, nor will they suddenly give me the additional time, drive, or motivation to make a costume two weeks before Halloween.

I have a full-time career outside of costuming. This is my hobby, something that I do for myself, on my own time, with my own funds. The fact that I own a sewing machine and can sew two pieces of fabric together does not mean that I am willing or able to sew something for someone else. The amount of time, effort, and research that goes into each costume I make is immeasurable. I cannot put a monetary figure on it, but I can tell you that it’s going to be more than that under $100 price range you’re hoping I’ll quote you. While not impossible, as I have made costumes for under $100, it is not feasible when requesting a custom costume.

People underestimate the value of having something custom made to their measurements. In the world of fast and cheap disposable fashion, bagged Halloween costumes, and mass produced Chinese cosplay, it is extremely difficult to convince someone that your work is actually worth the price you’re quoting them, and even then many costumers undersell themselves.

Fabric is not cheap. Not by a long shot.

But what about Halloween fabrics at Joann Fabrics?

Even these will cost you a bit. You’re not going to get $3 a yard fabric that’s above the super shiniest synthetic that would go up in flames if it even came near a candlelit jack-o-lantern. Say you need 8 yards of fabric for that Sofia Coppola Marie Antoinette costume you plan on wearing to your friend’s Halloween party, your satin is $12 a yard. You’re looking at $100+ with taxes on that fabric alone, add in steel boning, interfacing, lining fabric, lace, rhinestones, it begins to seriously add up.

But you’d said yourself you’ve made costumes for under $100.

I have. For myself, years ago when I was on a budget. My Queen Gorgo cost me all of $15 for two yards of a coarse ivory voile and a pack of brown quilt binding. The wig was borrowed, and jewelry and sandals were things I already owned. This was the exception, and not the norm. And I would never use quilt binding instead of leather these days. 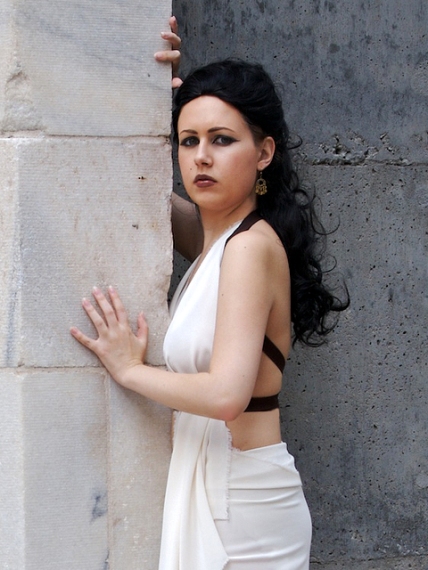 Maria Renard cost me $75-$100, but required two yards of silk dupioni, half a yard of duchess satin, and is lined in muslin. These were both made in 2007. Fabric costs, like everything, have increased.

Fabrics aside, my labour, my time put into creating this costume is billable. Most of what I make is painstakingly researched. Again, say you’re asking for Sofia Coppola’s Marie Antoinette, I’m going to need to research the fabrics, find what best replicates the costume. This is as much a part of the work that goes into a costume as the physical labour itself. As stated in my previous blog entry, Sibylla took me a decade to find the appropriate fabrics.

But I need this by Halloween, certainly there’s enough time.

Not really. The fact that I have a full-time career outside of costuming plays a huge factor in just what time I am able to dedicate to sewing. Back in February I took upon the rather daunting, ill advised task of making two intricate costumes from Castlevania: Lament of Innocence for my friend, Crystal and I. 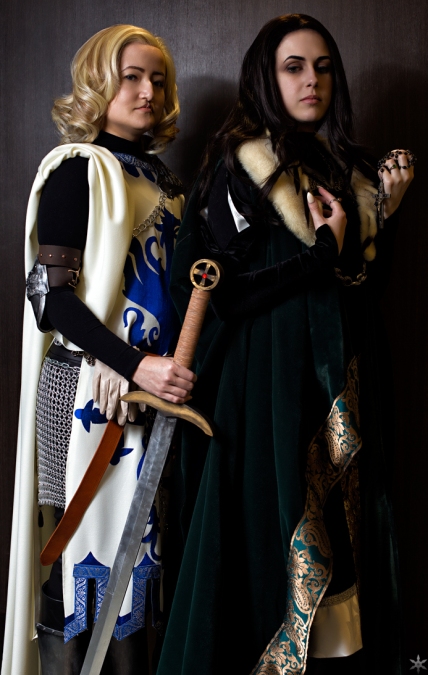 I made these costumes in less than a month while working 8 hour work days only to come home and spend 6 to 8 hours working on costumes. I finished them the night before we left for the convention. It resulted in me being horribly sick from a combination of inhaling fabric fiber, heated Worbla, spray paint, super glue coupled with a lingering illness, and lack of sleep. I went to the convention looking appropriately dead. I only met this deadline because these costumes were important to me, personally.

Lack of hours in the day isn’t the only time constraint. I do not keep fabrics on hand, trim, rhinestones, embellishments, all these have to be ordered, often from retailers who are overseas. Sometimes a specific item is out of stock, which adds additional wait time.

Concerning the hours spent working to create a costume, according to Glassdoor the average wage of a seamstress working at David’s Bridal is $11.71. This is making alterations and the like, not sewing, sourcing, researching any entire garment. Other sources cite $15 as the average wage for seamstresses. So, say it takes me 40 hours over the course of 3 weeks to create a costume, you’re looking at potentially $600+ in labour.

So you haggle, you argue, you plead that it would mean so much to this child who I’ve never met who was going to dress as little Marie-Therese with you, you cite that Halloween Express has a Marie Antoinette costume for $80.

Yes, it’s made out of plastic and comes in three sizes. Small, Medium, and Large. And yes, you would be better off buying it for Halloween because the costumes I create are not designed to be worn on Halloween. I don’t wear them on Halloween. If by chance I go out to a club in costume, I’m wearing something that I know might get trodden on, damaged, stained. I’m not using $60 a yard silk duchess satin for a costume that some inebriated pirate might accidentally spill his entire vodka Red Bull on. It pains me every year that I have costumes that could possibly win local costume contests, but the costume I would enter in probably has a greater value than the prize and it’s not worth the risk of damaging it in a poorly lit club.

All that said, the main reason I won’t sew your Halloween costume is that my ability to sew is not a public commodity. It is a hobby, a passion, something that I do for myself, and a very select group of close friends. And so if we have no prior relationship, I will not be valued only for my ability to sew. I am always willing and happy to help others with their questions when it comes to costuming, sewing tips, encouragement, but will not sew your Halloween costume. 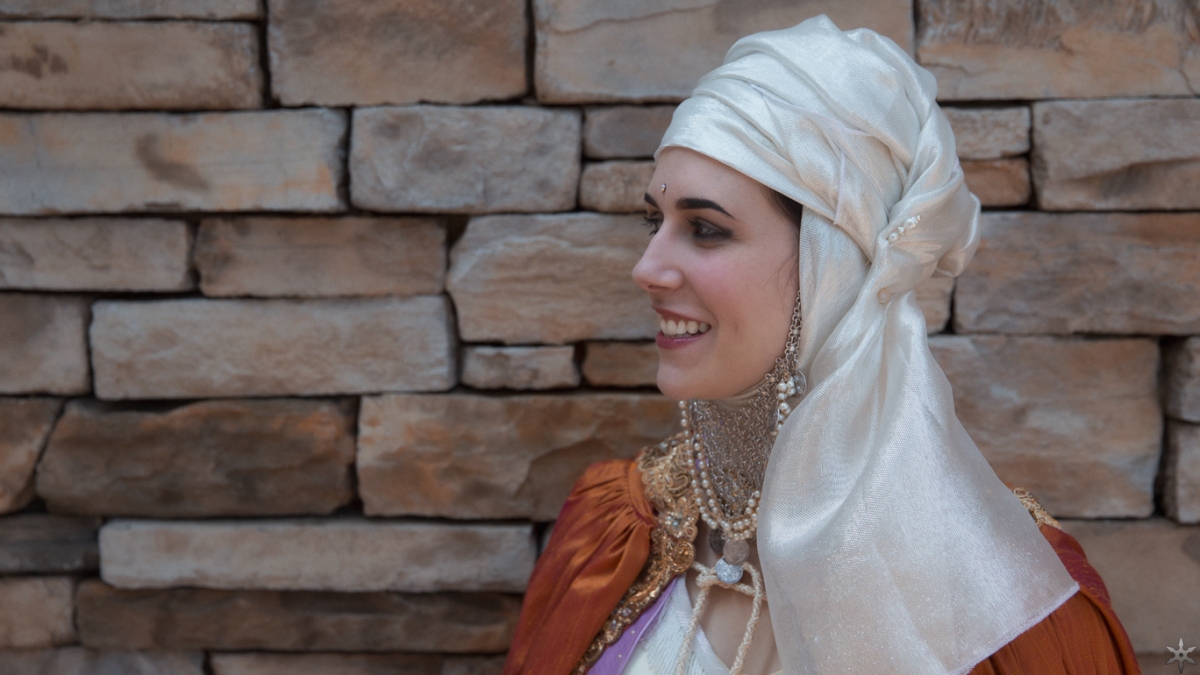 Sibylla from Ridley Scott’s Kingdom of Heaven has been my dream costume since the movie came out back in early May 2005. Since that time I have been searching for the right fabric for this costume. Some of it is easy to source, others proved to be nearly impossible. I have such a love for Eva Green’s portrayal of Sibylla, and an even greater love for the period of history in which the film was based that I was determined to finally cosplay her. 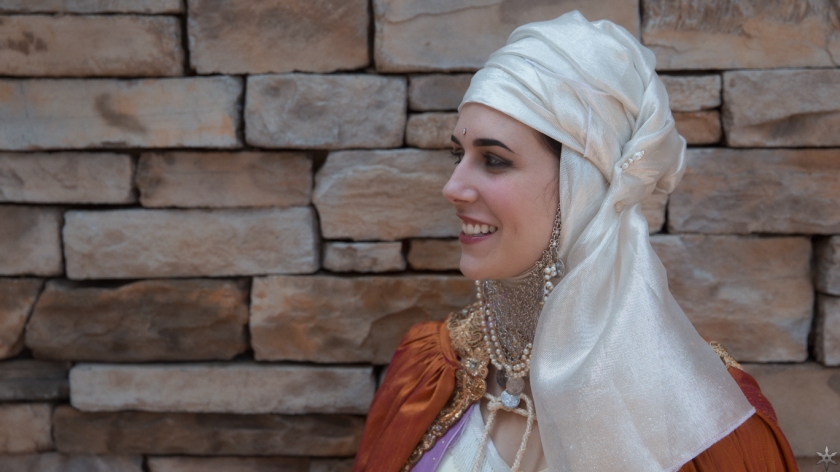 I have folders saved on my computer of screen shots, and have lovingly stalked The Costumer’s Guide for years to see if any additional resources have ever been added, sadly it seems as if this movie’s beautiful costumes designed by Janty Yates are all but forgotten.

2015 has marked the year in which I’ve made those costumes that I’ve loved and wanted to make for myself for a decade. The ones that few others will care about, but mean something to me, personally, as a costumer. And in finishing Sibylla and being so completely happy with the outcome–sacrificing my sewing machine of the past 8 years in the process–I feel like I’ve accomplished something that I set out to do over ten years ago.

The dress is made from a wheat coloured stretch silk charmeuse and trimmed in vintage beads along the wrist and neckline, and accented with a vintage mother of pearl Jerusalem cross pendant brooch, and patterned off Butterick Pattern B4827 with some minor alterations. Fabric was purchased from Mood Fabrics.

The lavender robe is made from a limited edition silk sari that I was fortunate enough to purchase the very last of–this is the fabric I’ve been looking for relentlessly for a decade, and finally found something close enough to work–it is lined in a lavender silk charmuese. The sleeves of the robe are accented with freshwater pearls. It was patterned off a vintage 1940’s housecoat pattern that I purchased off Etsy for another project and never used.

The cape is made from six yards of mandarin orange silk dupioni purchased from Silk Baron and trimmed in gold zardozi. It was sewn without a pattern. 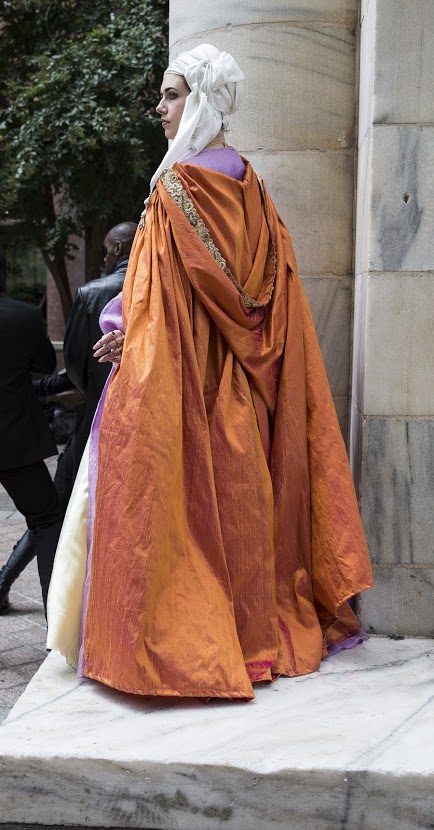 The headscarf is a silk lurex marquisette from B & J Fabrics in NYC, accented with pearls and tassles and held in place with multiple ornate pearl stick pins.

The sash is a matte silk duchess satin purchased from thunderlily.com, which provides a plethora of hard to find high end fabrics sourced from fabric retailers in NYC. In all, the costume is collectively 18 yards of silk.

Wanting to capture every detail, I made sure to pay particular attention to my hands in this costume. Purchasing rings and adding henna designs with Temptu alcohol based makeup. Everything is in the details.